So I've gotten a whiplash of nostalgia, ever since 4th grade to middle school (in my junior year of highschool now) I'd read the crap out of warriors, and subsequently Seekeers afterwards. I tried survivors, did not interest me despite being a dog person, and I'm completely in the dark about Bravelands. It kinda makes me sad nobody talks about this series, or even the other Erin Hunter books even though I love the warriors series, but I still appreciate this series for what it is. I remeber not finishing the series and only reading up to where Ujurak dies and I believe I started losing interest afterwards. Well sit back kiddies, I'm gonna fill this empty forum with a rant so this is gonna be a long one. I appreciate anybody who happens to be lingering here to give their thoughts. Don't be shy.

Now one thing I do vividly remember throughout my reading as a kid, I HATED Toklo with a burning passion...now I've started to pick up the series again due to curiosity, starting with the first book, trying to keep an open mind about the characters despite my previous thoughts. I've read all three of the first chapters of the book, loving Kallik's and Lusa's introduction (Note: I find it interesting how I missed Lusa's weird perspective of other bears, and her being somewhat immature which leaves me to suspect she wasn't as perfect as a character I thought she was when I was younger, which is nice since she was my favorite back then. I also can definitely telland remember Kallik, aside from Ujurak were the mature one out of the three, since she's self aware about the kind of environment and conditions they're living under) Yet as soon as I start Toklo's chapter all those memories of me hating this bear cub and me wanting to punt him came flooding back. There's nothing wrong with flawed characters, especially when these kinds of characters go through the most development, yet he's just as insufferable as I remember and last time I've checked in order to make rude characters entertaining to follow, you have to give them at least some likeable traits. But this chapter gave me no endearing qualities about him, especially with his resentment toward his brother Tobi.

Which just confuses me to be honest? He hates Tobi because he believes he holds both his mother and him back, and is a burden to them both and essentially mentions repeatedly how much he wants to ditch him and leave him to die, but at the same time still thinks about growing up to be big and taking care of both him and his mother...?

Maybe it's just an ego thing and it's like Toklo wants to prove to his mother that he can take care of both of them since Tobi is so weak, and that this is explained later on, or even just an intentional inconsistentacy in the book to beshow how contradictory and immature as a character Tokolo is but jeez I thought it'd make more sense if Toklo just straight up wanted to just take care of his mother and leave Tobi in the dirt. I don't like that thought process but it makes more sense in my opinion for his character.

Or hell make Toklo frustrated with his brother but not completely scapegoating him as to why they can't do the things they want to in order to survive. Make him feel obligated to take care of him because he wants to please his mother but make him get increasingly more bitter towards Tobi because of his mother constant berating of him not taking care of Tobi until he becomes needlessly cruel, at least then we could say he tried and or had good intentions from the beginning, because he just comes off as a narcissist and makes me feel as if what his mother did to him after Tobi died was probably justified, which it isn't. I shouldn't be feeling like a mother abandoning her own son should feel justified, that's messed up lmao.

As an older brother with a younger brother with a disability, I've felt something similar to Toklo before, especially when your parents expect you to be their younger siblings 3rd parent, it's not fun and or easy in the slightest. Which kinda makes me a little disappointed that Toklo just came out the womb full of hate. Especially when his mindset was like this when he and Tobi were only two months old...

I understand that characters like this, especially ones of who are children are immature and are usually bad with empathy, especially bear cubs, I could imagine them being very unforgiving. However I cannot recall when Toklo actually changes for the better as a character and or reflects upon his actions. I remember him mistreating Lusa and Ujurak and being highly antagonistic towards Kallik and never owning up for being a...well an ass. I also remember getting the feeling like his relationship with Ujurak was undeserved, all he does it save him from a bear trap (recalling from memories) and they just start following each other around. I don't remember feeling any ounce of sympathy for him during Ujurak's death. I remember Toklo comparing Ujurak to his brother constantly thinking how Ujurak was his better brother which really makes me think he hasn't learned anything. Does he ever get a moment of self reflection about the way he had percieved his brother...? Maybe there was something about guilt but guilt doesn't mean anything without the effirt to change.

My memory is not that good, so I suppose I should just keep reading. But uh yeah...I hate to say that Toklo just makes me less enthusiastic about this series because I do want to revisit and like this series. It especially weirds me out from the very miniscule reception of this book, I'm perplexed by how anyone can actually say they like Toklo and his attitude...Maybe I'm missing something and I just need to be patient. But until then...man I hate Toklo.

I agree with you. At first, I was agitated with Toklo and his behavior too. His ego and sense of pride have gotten in the way of his friends many times before, even sometimes risking the life of his friends because of his foolish actions. He just believes that he is the leader of all of the bears and should get respect. Just when I decided that Toklo would be my least favorite character in Seekers, I realized something. Sure, Toklo's attitude may agitate you at first, but for me, it's kind of understandable. after all, Toklo has had a tough life. After his brother, Tobi died and his mother abandoned him, things weren't easy. The bear that Toklo had once thought he was was now a pathetic cub that was all alone, scavenging and stealing food to survive. That was when he met Ujurak. After he saved him, he made a vow that he would protect Ujurak and have him survive since he failed to do so with Tobi. This bond that they formed with Ujurak would soon become that same bond that is shared with Lusa, Kallik, and Yakone. So you see, I don't think Toklo is that bad anymore, he gets better. If you still hate Toklo, then, by all means, I keep your opinion. I don't blame you, neither will I judge you, but don't Toklo's attitude get in your way of the series. Seekers is a wonderful book series that I recommend you finish. I myself have read all of the books, and trust me, that's an experience that I would gladly relive. 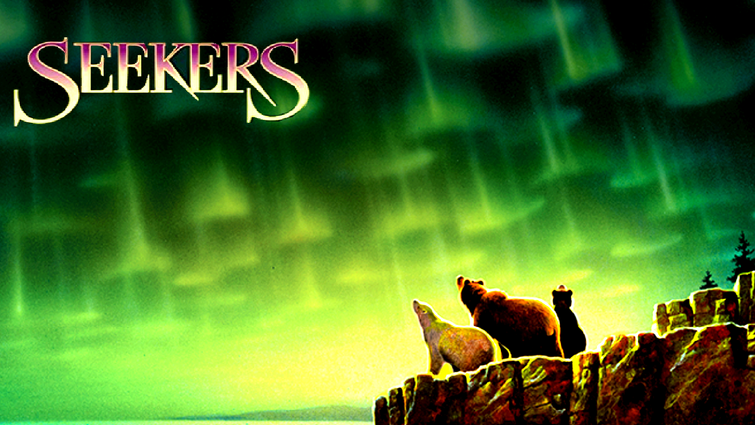 PS. By the way, is Warriors as good as Seeker?

What do you think?