Great Bear Lake
Chickens are a kind of bird. They are kept by humans in farms or sometimes as pets.

Most chicken species are near-flightless,[1] due to their relatively heavy weight compared to other birds. Depending on the species, their feathers can be black, white, brown, or mixed or speckled. Some can even have green or teal colored feathers, though this is more common in male chickens (called roosters and cockerels).

Female chickens (hens) can lay many eggs per year, sometimes just under four-hundred eggs for some species, so chickens can have well over a thousand offspring in their lifetimes.[2]

In the world, there are twenty four billion chickens, making them the most common, widespread and successful species of bird.[3]

Lusa opens a trash can looking for food for herself, Toklo and Ujurak. She finds a chicken carcass, and narrowly avoids being attacked by dogs. Toklo and Ujurak refuse to eat the chicken, so Lusa eats it herself. Lusa gets a bellyache from it afterwards. 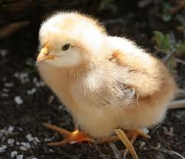 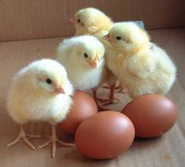 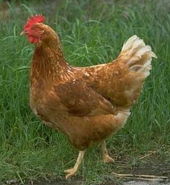 Adult Chicken[4]
Add a photo to this gallery

Retrieved from "https://seekers.fandom.com/wiki/Chicken?oldid=25985"
Community content is available under CC-BY-SA unless otherwise noted.