Doves, like pigeons, are stout-bodied, with short necks and slender bills, fleshy ceres and vary in size. The smallest species of dove and pigeon is the size of a House Sparrow, and weighs only twenty-two grams,[2]  whilst the largest species is almost the size of a turkey, and weighs two to four kilograms.[3]

Mostly, doves and pigeons feed on nuts, seeds and fruit, though they commonly feed on littered human food.

Most species are common and some are considered pests, though a few species are rarer, one being extinct in the wild.[4]


In the Return to the Wild arc

Toklo tries to hunt a dove, but Chenoa stops him. Chenoa tells him that her name means dove and she felt that it was wrong to hunt them. 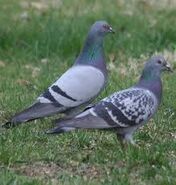 Rock Dove/Feral Pigeon[8]
Add a photo to this gallery

Retrieved from "https://seekers.fandom.com/wiki/Dove?oldid=24603"
Community content is available under CC-BY-SA unless otherwise noted.