Little Blackberry (by Ashia and Stella)

Tungulria (by Aga)
Sweetheart (by Sally)

Lusa often plays games with the other cub in the Bear Bowl, Yogi. The two often asked Stella, the second to oldest black bear, to tell stories about the wild and other things. One day, while Lusa was trying to climb a tree to reach Yogi, King, her father, came over and taught her that climbing required quick movement rather than slow deliberation. Lusa was amazed to see that he was right, and upon reaching the top, she was dazzled by how big everything really was beyond the Bear Bowl. She found all sorts of different kinds of zoo animals. Fascinated, she began to wonder about the wilderness and other creatures that inhabit it.

When Ashia, Lusa's mother, began to behave and talk vaguely, Lusa started to worry, despite the comforting of the other bears. She alerted the flat-faces to the problem, and they took Ashia away. Lusa waited four sunrises for her mother's return. When she returned, Lusa was excited to hear all of what her mother saw. King was angered by the mention of the wild, startling Lusa.

When a new grizzly comes to the Bear Bowl, Lusa is intrigued by the newcomer. This turned out to be Oka, the mother of Toklo. Lusa tried to befriend and talk to the she-bear several times but found that Oka was too miserable to talk. When Oka attacked a flat-face, Lusa was shocked. Oka told her that she abandoned Toklo and allowed her other cub, Tobi, to die. Wanting to comfort her, Lusa made a vow to find her missing cub, and Oka thanked her, and the two bears slept close to each other until the next morning when Oka was taken from the exhibit to be euthanized. Meanwhile, Lusa began to try and find a way out of the Bear Bowl, then decided to play sick to get out. She started to not eat and behave strangely as Ashia did. The zookeepers took her into a treating facility, which she escaped from and went into the woods.

After many difficulties in the wild, Lusa found Ujurak in the form of a hare. She tried to hunt him but was stopped by Toklo. The book ended when she realized that this was the bear that she was looking for.

Lusa starts her journey with Toklo and Ujurak after meeting them. At first, Toklo dislikes her, but the two eventually form a somewhat tense friendship. They encounter quite a few dangerous things, one where Toklo protects the other two from eagles, they were chased by wolves and another where Ujurak gets hit by a firebeast. Near the middle of the book, the three arrive at Great Bear Lake for The Longest Day ceremony. Unable to find acceptance amongst the grizzlies gathered there, she leaves Toklo and Ujurak to stay with black bears. There, she meets a friendly cub named Miki, but he is soon stolen away by a group of young polar bears, including Taqqiq. These bears want to use him as collateral to gain black bear territory. Unable to leave him in danger, Lusa goes against the wishes of the older black bears to attempt to rescue Miki. Toklo initially refuses to help, but after some persuasion from Ujurak, comes to protect her. Kallik also thinks that her brother's ideas are wrong and helps with their plans. After a brief battle, Miki escapes and the polar bears leave. Toklo, Lusa, and Ujurak, this time accompanied by Kallik and Taqqiq, then continue their journey.

Kallik and Lusa quickly become close friends, although Lusa is fairly intolerant of her brother, Taqqiq. Throughout the book, Toklo criticizes them for talking too much, on one occasion calling them magpies instead of bears. During the early parts of the story, the travelers encounter an older polar bear named Qopuk, who dreamed of going to The Last Great Wilderness. However, he is too old and close to death. Lusa is quickly sympathetic and tries to help him, even asking him to travel with them, but he dies soon after telling them that they will have to cross an extremely wide river and the dangerous Smoke Mountains if they want to make it to their destination. Ujurak, Kallik, and Lusa perform a quick burial for him before they move on. After a fight with Toklo over what appears to be Ujurak's death, Taqqiq, scornful of all the bears but his sister, eventually leaves the group.

All the bears are amazed at the sight of the great river but resolve to cross it. Unfortunately, they are forced to cross the Smoke Mountains anyway when a firebeast injures Lusa mortally and they must escape quickly. While deeply unconscious, Lusa has a dream in which the bears in the Bear Bowl tell her that she must save the wild. During the dream, she says that she "isn't going to make it," and "the tree spirits are calling to her". A few days after she wakes up, she falls into a state similar to depression, causing Toklo and Kallik to worry. She then tries to run away, but Toklo stops her. This triggers an even closer relationship

The group continues across the Smoke Mountains, pausing to hunt from flat-face camping sites, though they occasionally catch animals as well. When they are almost through the mountain, they see a hunting lodge and realize it is the source of all the myths surrounding the mountain. However, the flat-faces see them and quickly come with guns. Lusa is shot in the shoulder but manages to getaway.

After reuniting with Kallik and Ujurak, Lusa begins to worry about Toklo. Ujurak points out that he was likely to stay and fight, and volunteers himself to go look for him. Kallik joins him, but won't let Lusa come because of her wounded shoulder until Ujurak attempts to reason with her. Eventually, they find that Toklo trapped in a firebeast about to drown. With the effort of all three bears, they are eventually able to drag him out. Kallik is surprised that Lusa did all that she did with such a hurt shoulder. Exhausted, the bears sleep for a while, then realize upon waking up that they have made it over the Smoke Mountains. All are excited, except for Ujurak, who feels that his journey has not yet ended.

In this book, Lusa is mostly seen near other bears. She is worried about the day the bears will split up, with Kallik longing for the ice, and Toklo wanting a brown bear territory. Toklo leaves, and Lusa is heartbroken. Ujurak is taken by flat-faces, and they rescue him. Toklo comes back, and they stare at the Northern Lights. Then Ujurak says Kallik must lead them into her world now.

Lusa and her companions venture out onto the ice. Lusa is pulled by the longsleep (hibernation) and cannot eat seal without getting a bellyache. Near the middle of the book, all four of the bears have a dream sent by The Pathway Star, which appears to Lusa as Arcturus. Arcturus tells Lusa to follow her instinct. Toklo decides to take Lusa back to land, but on the way there, they find an abandoned flat-face den. Lusa eats some canned peaches, while Toklo and she eat some frozen fish. As they continue to journey back to land, Lusa is tranquilized by some flat-faces that clean oil off of animals, thinking she is a polar bear cub drenched with oil. Toklo escapes and reunites with the other two bears. Ujurak turns into a teenage flat-face and frees Lusa. Then, the four friends go back to the adventure, trying to get to the place where the sun rises.

Lusa constantly struggles with the urge of longsleep and the lack of suitable food for her. Lusa is the one to confirm they are on land. Her health starts in improvement since there are plants and non-seal prey. When the group comes across a white bear, they chase her away from her kill of the seal, and Lusa is the only one to notice that it has been poisoned. Despite the other's protests, she kicks it off a cliff, saving them from sickness. Later, Lusa is injured by a bullet flat-faces aimed at Ujurak. When the avalanche kills Ujurak, she is grief-stricken.

Relationships with the other Seeker Bears

Toklo initially dislikes Lusa because she is "soft" and carries a message from his mother, while she struggles to prove she is brave. By the end of Great Bear Lake the two form a tense friendship. During the third book, Smoke Mountain, their bond deepens further to codependency; Toklo supports and protects Lusa, while she encourages him to do well, and worries when he is sad or angry.

Lusa quickly befriends Ujurak, provoking some jealousy from Toklo, and the two are often described as being somewhat similar. Lusa looks up to Ujurak as a teacher at some times, but still behaves playfully towards him, often giving him a head-butt or quick poke like they are brother and sister. Lusa is willing to get hurt to save Ujurak as seen in Spirits in the Stars; when a flat-face aimed a firestick at Ujurak, she pushed him out of the way and took the bullet instead.

Although wary of polar bears after Miki's kidnapping, Lusa and Kallik become fast friends even before Kallik joins the travelers. Toklo frequently accuses them of talking too much, while Taqqiq agrees that white bears should not be friends with black bears. But the two she-bears are quite close, and Kallik begins to become over-protective of Lusa during The Melting Sea.

Lusa and Yakone are friendly toward one another. Yakone is respectful and helpful to her, carrying her on his back in Island of Shadows to let her rest when she becomes exhausted. Yakone is impressed by her knowledge of flat-faces, and respects the fact that she wasn't born in the wild.

"She might not have been born in the wild, but she had managed just fine for moons and moons. She wanted to be a wild bear, even if it meant never going back to the Bear Bowl, and her family. And black bears were better than grizzlies any day! Her father had said that they were the kings of the forest."
—Toklo thinking about Lusa Great Bear Lake, page 7

"What about you? You didn't even think twice about following those two. They say, 'Let's go onto the ice' and right away you say, 'Where do I put my paws?' If you ask me, you're the brave one."
—Toklo admiring Lusa's bravery Fire in the Sky, page 5

Lusa: "The forest isn't my real home, though."
Yakone: "But I thought..."
Lusa: "No, I was born in the Bear Bowl."
Yakone: "What's a Bear Bowl?"
Lusa: "It's a place flat-faces made. There are a whole bunch of bears there. My mother, Ashia, and my father, King, and my friend Yogi. And one time I met Toklo's mother, Oka, there."
Yakone: "Sounds weird. Why would the no-claws make a place like that?"
Lusa: "They liked looking at us, I guess. We had fun there, Yogi and I. We used to hide like this. And then we'd leap out and pounce!"
—Lusa telling Yakone about the Bear Bowl The Melting Sea, page 80

Pakak: "You're a funny color."
Tonraq: "Yes, we've never seen a bear like you before."
Lusa: "Well, where I come from, there are lots of bears like me."
—Pakak and Tonraq upon seeing Lusa The Melting Sea, page 226 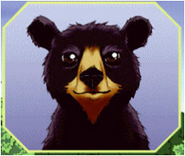 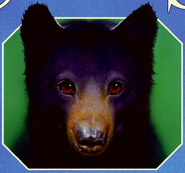 Retrieved from "https://seekers.fandom.com/wiki/Lusa?oldid=26755"
Community content is available under CC-BY-SA unless otherwise noted.