This is the page about Toklo's mother. For Toklo's daughter who was also named Oka, see Oka (TLD).

In the Seekers Manga

Oka was first seen taking good care of her cubs, Toklo and Tobi, by letting them play and finding bulbs for them to eat. She kept having to move dens because they were in another bear's territory. The bear was later revealed to be Toklo and Tobi's father. She later got angry at Toklo when he covered Tobi with dirt, thinking he was dead. Later, she fought to protect her cubs from her mate, and they left the forest and headed for the mountains.

Oka is first seen warning Toklo to move out of the way of a firebeast. She explains why he'll never be able to fight them, and orders him to find some dandelions. She is then seen encouraging Tobi to stand up and eat the dandelions. Toklo is frustrated by his mother's fussing over her sick cub and her refusal to listen to Toklo. When he asks to go back to the site of the grain spill, Oka agrees, but when a large male bear approaches, she hurries the cubs away and leaves the food for the grown male, upsetting Toklo. The small family is starving, and Oka decides to take them over the mountain to the Great Salmon River.

Oka tells Toklo to help prepare their bed, as they are going to sleep early for the journey. Once they set out, she sticks close to Tobi and helps him climb the mountain. Oka stops briefly to play with Toklo, but rushes back to Tobi when he complains of feeling sick, which makes Toklo upset again. Tobi says he can't walk any farther, and Oka carries him on her back for the afternoon and the evening. Toklo feels like his mother is ignoring him again, and forces her to stop that night. Oka agrees to find a den on top of the mountain.

The next morning, Oka wakes to find Toklo crouched over Tobi's dead body. She roars with anger, blaming Toklo for not saving him, and refuses to move the whole day. Only when Toklo brings moss does she get up and start burying Tobi's body. Oka brings Toklo down the mountain to the river, refusing to respond to his excitement. When Shoteka attacks Toklo for the first time, Oka defends her cub, but refuses to show him how to fish. Toklo tries fishing on his own, but Shoteka tries to drown him. Oka rescues him again, only to turn her back on him.

Toklo watches his mother acting crazy all day, until she finds him sleeping and covers him with dirt and leaves, thinking her last cub has died. Toklo runs away, attempting to forget his mother. Much later, Toklo recalls Oka teaching him not to steal another bear's prey, but chooses to eat part of an adult brown bear's cache.

Not long after driving Toklo away, Oka, whose name is not known to Lusa, is brought to her Bear Bowl to live with the other grizzly, Grumps. She sleeps most of her first day, but when Lusa sees her awake, she goes up to talk to Oka. Lusa often witnesses Oka talking to herself, saying Tobi's and Toklo's names. Ashia, King, and Stella warn Lusa to stay away from her, and Yogi agrees that Oka is crazy, but Lusa thinks she's sad after losing her cubs.

One day, Oka attacks a flat-face who came in to feed her, frightening Lusa and resulting in the grizzly being tranquilized. Lusa waits for her to wake up, and Oka knows she is going to be put to sleep, regretting that she never told Toklo she was sorry. Lusa promises to go to the wild and tell Toklo his mother loved him.

Once Lusa has finally found Toklo, he refuses to listen to her message from Oka. He is greatly afraid of swimming, thinking his mother's and brother's spirits will drown him if he swims too deep. When asked to swim to Paw Print Island, Toklo worries about the water, and believes he hears spirits talking to him. Once Toklo swims deep enough, he starts to sink, thinking he is going to drown, but Oka's and Tobi's spirits appear to him and help him swim. Toklo suddenly realizes that they want him to live, and doesn't want them to leave.

While Toklo fights Shoteka on the island, Oka helps him win by telling him to move quickly.

In Smoke Mountain, as a spirit, she encourages Toklo to wake up and not drown, when he is trapped inside the firebeast.

Oka and Tobi come to Toklo after Ujurak dies and Oka comforts him. When Toklo tells her that he is empty, she tells him he is not, for he has the spirit of the wild within him.

Toklo recognizes the scent of Chogan as the bear who chased him, Tobi, and Oka out of their territory. Oka is mentioned multiple times when Toklo describes his father's wrongdoing.

At the end, Toklo is mentioned to have named his daughter after his mother.

"You are my son, and I love you. I want you to live for a long, long time. Tobi and I will be waiting for you, always. But not before it is your time to join us. Go carefully, precious Toklo"
—Oka, after helping Toklo swim Great Bear Lake, page 193

"You are not empty! You have the spirit of the wild in you."
—Oka to Toklo Spirits in the Stars, page 251

"We can't save everyone... not all of the time."
—Oka to Toklo about Ujurak's death Spirits in the Stars, page 251 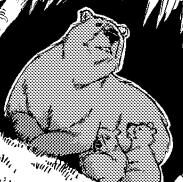 Oka with her cubs