Salmon are a type of fish that are common prey of brown bears. They are gray and black when they live in the sea, but turn red or pink when they migrate into the rivers to breed.


In The Original Series arc

Toklo tries to catch a salmon, only to fall into the river. Later, he comes across a mother bear teaching her cubs how to fish. He steals a salmon off one of her cubs. After he meets him, Ujurak accidentally turns into a salmon, so Toklo has to tell two adult grizzly bears that the fish were poisoned, saying that his mother died after she ate one. The plan works, and the adult bears leave, but Toklo gets mad at Ujurak and leaves him behind. Toklo later returns to find Ujurak soaked on the river bed. He reunites with Ujurak and they leave.

Toklo gets sent to Paw Print Island to make the salmon come back. Once he spends a day there, the salmon return when he comes back.

Ujurak turns into a salmon by mistake. Ujurak is then shown that the flat-faces are taking all of the nutrients from the stream, and thus causing the fish to leave the streams. 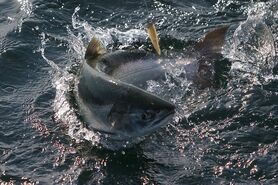 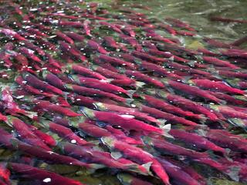 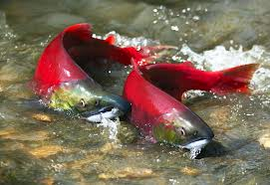 River Salmon
Add a photo to this gallery
Retrieved from "https://seekers.fandom.com/wiki/Salmon?oldid=24654"
Community content is available under CC-BY-SA unless otherwise noted.