Seals are small to medium sized marine mammals and one of the most common prey for polar bears during the winter.

They have sleek, fat-rich bodies with hair covering their skin, but it is barely visible in water. Seals do not have visible ears. They have short, smooth pelts. They have very sensitive eyesight and whiskers, which are many times more sensitive than a cat's.

Bears catch them by waiting quietly for them to pop up from their ice holes where they breathe. They are also hunted by orcas. Orcas will find one on an ice floe, and group together, swimming underneath the ice floe to create a wave which should hopefully make the seal fall into the water. The orcas will then grab their victim's tail to avoid the powerful jaws so that they can kill it without being injured.


In The Original Series arc

Nisa teaches Kallik and Taqqiq how to catch seals. Nisa takes her cubs to a seal breathing hole and tells them to be patient while she waits for a seal to come out of the hole to breathe.
After Nisa and her cubs are chased away from a whale carcass, Nisa catches some seal pups, but again they are chased away by other polar bears looking for food. After Nisa is killed, Kallik attempts to hunt seal, with no success.

Kallik talks to Lusa about seals and plans to catch her some when they get to the Place of Everlasting Ice.

As Lusa, Kallik, Toklo, and Ujurak venture on the endless ice, Kallik catches a seal for them all. Toklo describes it as "a mixture of fish and rabbit".  However, as they travel on and eat more seal, Lusa begins to grow sick.

On Star Island, the Seekers find a she-bear dragging a seal along a cliff, and they chase her away. Kallik, Toklo and Ujurak were oblivious to the fact that the seal had something wrong with it, but Lusa does, and against their will kicks the carcass off the side of the cliff, infuriating Toklo and puzzling Ujurak and Kallik.

It is later revealed that the seals of Star Island are poisoned due to a leak in an oil pipe, which is the main problem in the story.

Ujurak becomes a seal to move them to clean waters, and meets many seals.

Toklo tries to catch a seal, but Kallik accidentally scares it away. Yakone catches one and brings it to the bears to eat.

Yakone and Kallik catch seals for Akna and her cubs as well as the rest of the group. Also, Salik, Taqqiq, Iqaluk and Manik along with two other male bears have been stealing seals from other bears.

Kallik mentions how she missed the ice and taste of seals. 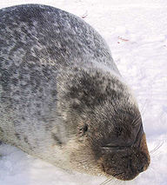 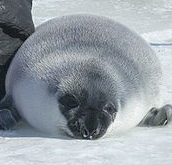 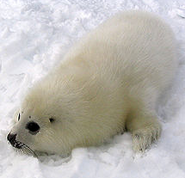 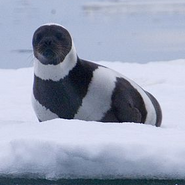 Ribbon Seal
Add a photo to this gallery
Retrieved from "https://seekers.fandom.com/wiki/Seal?oldid=25820"
Community content is available under CC-BY-SA unless otherwise noted.