Grumpus (by Lusa)
Scavenger (by Aylen)

Toklo's Story, The Quest Begins, Great Bear Lake, Smoke Mountain, The Last Wilderness, Fire in the Sky, Spirits in the Stars, Island of Shadows, The Melting Sea, River of Lost Bears, Forest of Wolves, The Burning Horizon, The Longest Day


In the Seekers Manga

Toklo was traveling with his brother, Tobi, and his mother, Oka, in a forest they were in before the events of The Quest Begins. He decided to look for food secretly while his mother rested her injured foot, only to have Tobi follow him. They then found a dead carcass of a moose and wanted to bring it to Oka, not knowing that it belonged to their father. They were found soon after and got chased to a den that belongs to their father. Toklo says that they were going off his territory, and their father let them off but not without warning them to leave his territory the next morning. Toklo and his family were later thrown out of the forest by Oka's former mate.

Toklo was traveling with his mother, Oka, and his sickly brother, Tobi, along the border of Alberta and British Columbia, Canada. He was almost run over by a firebeast while pretending that a log in the road was a rabbit, and pretended to hunt it. He was interested in becoming a strong bear and learned from his mother quickly. However, when Tobi died, Oka was blinded by grief and abandons him when they reach the Great Salmon River.

Toklo was then left to fend for himself and soon came upon another young grizzly cub named Ujurak. Shortly he agreed to let Ujurak travel with him. When Toklo learns of Ujurak's shape-shifting abilities, he is amazed and doesn't know what to think. While by a river, Ujurak becomes a salmon and Toklo is forced to lie to the grizzlies hunting there that the water is poisoned to save Ujurak.

They came upon another young bear named Lusa. She was a small black bear cub and said that she had seen Toklo's mother, Oka and that she told her to find him to tell him she was sorry for abandoning him. Toklo didn't want anything to do with her, though. However, Ujurak persuaded Toklo to let Lusa come with them on their journey.

Lusa told Toklo about how Oka was sorry about what she did, and that Oka loved Toklo, but he dismissed it, still angry that she had left him. When Lusa and Ujurak talk about signs, Toklo thinks they are crazy, yet goes along with it and listens to Ujurak.

The signs lead to Great Bear Lake, where thousands of bears were meeting for the Longest Day. Toklo and Ujurak get separated from Lusa when other brown bears tell her she doesn't belong there.

To convince the spirits to bring back the salmon, a bear needed to swim to Paw Print Island. Shoteka, a bear who hated Oka and Toklo for Oka rejecting him says Toklo should swim to the island, hoping Toklo would drown in the process.

While swimming there, the spirits of his mother and brother visited him. Toklo thought they were trying to drown him but soon realizes they still love him and they help him to the island.
Shoteka comes to kill Toklo for revenge, and the bears fight. Oka tells him what to do and he soon wins.

Toklo and Lusa seemed to be closer to each other. The bears, including Taqqiq, heard of a place called Smoke Mountain, from an old bear named Qopuk. He soon died, and the bears decided to go to Smoke Mountain. Taqqiq left the group soon afterward.

When Lusa was hit by a firebeast and fell into a state of depression, Toklo helped her to travel by carrying her on his back. Later he confronted her and convinced her not to run away. The bears encountered flat-faces, who captured and trapped Toklo. He almost drowned because the firebeast fell into a river, and began to sink. The other bears rescued him and arrived at the Last Great Wilderness.

Toklo was cornered by a young flat-face cub when he was deciding to hunt a caribou. After some time, Toklo chose to leave the group forever and live on his own, which made Lusa very sad. But, he struggles to live on his own in the mountains, where he hears that prey is scarce, and the flat-faces are building dens near and destroying the trees.

When Toklo was going toward the flatlands, he discovers that there are lots of metal buildings and metal birds. There, he rescues Lusa and Kallik from getting crushed by the metal bird. Toklo finds out that Ujurak was missing and he joins with Lusa and Kallik to help find him.

Toklo and the group were guided by Kallik, to and through the ice. He is angry and tense as Kallik takes the lead instead of him, proving herself more effective then he is on the ice.

On one night Toklo had a dream from the lone bear. In the dream, the lone bear warned him that one of the four was going to die. Toklo thought it was Lusa, so he told Ujurak and Kallik in private about his theory. Then Lusa and he headed back to land. Before they made it, Lusa was captured by flat-faces. Toklo is found by Kallik and Ujurak, and the three devised a plan to free Lusa. They did so and went back to following the rising sun across the ice.

Toklo and the rest of the group arrive at Star Island.

There, the Seeker bears meet a polar she-bear who has a young cub. Kallik comes back to the makeshift den of the Seeker bears that night and reveals that she had taken the cub once she realized that his mother had died. Toklo is annoyed at this and believes Kissimi, the young cub, will slow them down.

The bears soon find out that sickness has been spreading across Star Island and Ujurak believes that they should help the bears.

Toklo fights with Unalaq, a polar bear from Star Island. When Ujurak died saving him, Kallik and Lusa, Toklo was very upset. At the end of the book, Kallik gave Kissimi to the Star Island bears as she realized she couldn't look after him. Toklo agreed with her choice, and let Unalaq's brother, Yakone travel with them, as he could help them hunt. Afterward, Ujurak came to Lusa in her dream and comforted her.

Toklo is grief-stricken after the death of his best friend, Ujurak, and believes the journey no longer has any meaning. The trek home seems long and empty without one of his companions. Toklo is constantly annoyed with Yakone and wants to be the leader of the group, which he thinks Yakone will get in the way of.

Later in the story, Toklo falls down a hole made by flat-faces and is eventually rescued, though he is sadder than ever, and believes he should have died.

When the bears meet Nanulak, a young Grolar Bear, Toklo treats him better than any of the other bears and tells him stories of his home, where the bears are heading. Nanulak and Toklo agree to share their territory, and Toklo becomes happy again. The other bears don't trust Nanulak, but Toklo believes they are just jealous. When Ujurak warns Toklo that Nanulak might not be what he seems, Toklo accuses him of just being jealous.

On the way, Toklo meets Tikaani, a female polar bear who is about his age. She teaches him how to hunt lemmings in the snow, and together they catch prey.

He meets her again the next day and they throw snow at each other and play before going hunting. Tikaani teaches him how to hunt birds, and gives him a goose she catches. She asks him to stay with her and Toklo wants to until Ujurak reminds him of going home, which he believes he must do to end the journey. Toklo sadly tells her he has to leave, and Tikaani tells him polar bears and grizzly bears have cubs sometimes, hinting she likes him. They touch muzzles before they leave, and Toklo is sad to leave Tikaani, knowing he would probably never see her again.

Soon after, Nanulak points out a polar bear who he says fought him and hurt him. Toklo is angry and goes to fight the bear. The two bears fight, though the polar bear does not want to until Toklo calls him a coward. Toklo wins, and when Nanulak tells him to kill the other bear, Toklo refuses. The polar bear says that Nanulak is his son and Toklo is outraged that Nanulak almost made him kill his father.

Toklo invites Nanulak to come with them, to the other bears' horror, but Nanulak refuses, saying Toklo was a traitor. Toklo says it's his own choice and the bears leave.

They find the building Kallik was captured in, and then a firebeast runs into it and catches on fire. Toklo and the others go in to rescue bears. Ujurak in the shape of a Flat-face and rescues two bears, while Toklo and the others are rescuing a young bear named Shila.
When Shila wakes up and they are away from the flat-faces, she tells them how she was chased away by Taqqiq and his friends. She also says she needs to get back to her mother, Sakari, and her brothers, Tonraq and Pakak. Shila takes them to their den but all they find is fur and blood. Salik and his gang catch up to him, and Toklo watches as Kallik attacks Taqqiq. Toklo and the others leave Salik and his gang, but Taqqiq stays behind and shows them where Shila's family is.

"In case you hadn't noticed, we're in danger, bee-brain."

"He blamed himself for Tobi's death. It had to be his fault, otherwise, Oka's anger made no sense. But that was just the start. Toklo has lost so many bears since. With each loss, he's blamed himself more. He feels responsible for everyone."

—Ujurak to Lusa about Toklo in River of Lost Bears, page 96

"You feel responsible for Tobi's death, don't you? When Oka drove you away, you thought it was because you'd let him die. That's not true. It's wasn't your fault he died. It wasn't your fault Ujurak left. And the wolverines attacked me because I ran away, not because you didn't stop them. You're not responsible for us, Toklo. You may be bigger and stronger than me. You may be more used to the forest than Kallik or Yakone. But it doesn't mean you have to protect us from everything. We've traveled as far as you, Kallik, and I. We've seen the same things and survived the same dangers. Our fate is our own. Our lives are not in your paws."

—Lusa to Toklo in River of Lost Bears, page 99

"Never! I have a different family now. I don't need you, and I never did. I'm strong because of who I am, not because of you!"

—Toklo to Chogan in Forest of Wolves, page 182

"I came such a long way to find this. Instead, I found the bear who was responsible for destroying my family. My own father."

—Toklo about his father in Forest of Wolves, page 183 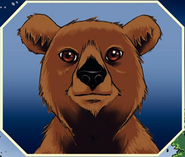 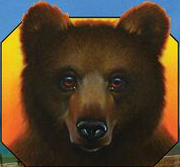 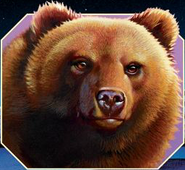 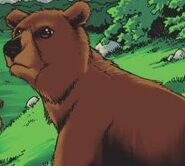 Retrieved from "https://seekers.fandom.com/wiki/Toklo?oldid=26051"
Community content is available under CC-BY-SA unless otherwise noted.