Yakone makes his first appearance in the series on Star Island. While climbing a hill Toklo sees him standing on a distant rock. He gazes at them for a moment, before galloping away and vanishing behind a hill.

He is friendly to the bears, but most especially towards Kallik. He is one of the bears that gets sick from eating the poisoned seals. Ujurak helps him get the sickness out of his system by making him throw up by eating moss.

He goes hunting and swimming with Kallik and later sees her carrying Kissimi away. He then tells Toklo to leave after he fights with Unalaq.

At the end of the book, when Ujurak dies, he decides to go with the bears. He develops a crush on Kallik.

Return to the Wild

Yakone is new to the Seekers group, yet he fits in well and gets along well with the other bears. Toklo is often jealous of him for supplying prey for the bears and being a bit like a leader, which Toklo often does. Toklo wishes Ujurak was with them rather than Yakone.

When Nanulak joins the group, Yakone seems uneasy, yet treats him well. When Nanulak nearly pushes Kallik off a cliff, he is furious at Nanulak. When the truth is revealed about Nanulak's kin, like Kallik and Lusa, he is shocked and appalled at Nanulak's lies, and wants him to leave.

In the beginning, the four Seeker bears are having a race. Lusa falls in a drift, so Yakone helps her.

Later on in the book, when they arrive at the Melting Sea they meet a she-bear, Akna, and they stay with her and her two cubs, Iluq and Kassuq. Toklo teaches her how to hunt on land. They then leave her, but first Kallik and her hunt.

Later on when they are travelling they go by the no-claws dens, they see a firebeast crash into a building. A bear in a cage is unconcious inside, so they then help her out, They go inside and they try to help two male bears in a cage. It is too hard, so Ujurak comes in the form as a no-claw and he helps them. They help the one bear in the cage and learn that her name is Shila. She says that she doesn't remember anything.

Later on, they go onto the ice and they meet Taqqiq and some of his friends who attack them because they say they are on their territory. They fight the journeying bears and Shila says they have been attacking bears for food and destroying dens, and she tells them that they have attacked her family.

The Seekers then go and look for Shila's family, and Taqqiq and his friends follow them they say that they are gone. They then think they are dead, so Kallik attacks Taqqiq and calls him a murderer. She tells him she wishes he was never born. Toklo breaks them up and they leave.

Taqqiq follows and tells him they did not kill them, so he helps them find them. They find Shila's family, and Shila is happy to see her family again. Shila's mother does not know if she should trust Taqqiq, so she keeps an eye on him.

In the end of the book they gather all the polar bears and Toklo teaches them how to fight like a grizzly bear. Taqqiq gets his friends and they all fight Salik's bears. The polar bears all win.

In the end, Kallik can't sleep and keeps Yakone awake. He tells her to come outside, where they then have a private talk and they decide to go with Toklo and Lusa until they go home. Then, Kallik and Yakone will go back to the Melting Sea.

Yakone is struggling in the forests, and has never seen forest creatures before. Like Kallik, he keeps falling over brambles and roots. Whenever it becomes hot, he and Kallik swim in the river whilst Toklo and Lusa walk on the shore. He and Toklo become friendlier toward each other in this book.

Yakone is the one to find Chenoa's body, and he helps Toklo and Kallik bury her.

Yakone then gets his paw caught in a deadly foothold trap, and Toklo sees a coyote, watching. It meets his gaze boldly - it is not afraid of them at all. He then sees a whole pack. Toklo manages to free Yakone, but Yakone has two toes torn off, and his paw is bleeding badly. He can barely walk, but Toklo keeps pushing him onwards. Toklo tells Kallik and Lusa that he saw a whole pack of coyotes, and Kallik realizes that the coyotes are tracking them - and waiting for Yakone to die.

Lusa devides a plan - Yakone will act dead whilst the others hide, and they will ambush the coyotes. Yakone agrees to it, and they go to a gorge. Yakone lies down, and keeps very still whilst the others make it look like they are grieving for him. As they leave, they see the coyotes, and pretend not to notice them.The others watch, hidden, as the coyotes approach. When the Alpha coyote howls to the pack, they leap onto Yakone, but Kallik, Toklo and Lusa attack, and Yakone escapes.

The plan is successful, the pack scattered. The bears have to jump onto the top of a snakebeast to get to the mountains, but the pack has rejoined, with more coyotes then before. Before Toklo can jump, the coyotes try to drag him back, but Yakone grabs him as he leaps, pulling him on. One of the coyotes is still holding onto Toklo, but falls, and is crushed by the snakebeast.

As Lusa assures herself that Toklo was fine and so was everyone else, her thoughts fly back to the injured Yakone. He is lying on his side, his injured forepaw stretched out in front of him. Lusa sniffs the paw which has a nasty, sweetish smell. Kallik sits close to him, bending over him with a worried look in her eyes.

Lusa questions him on how he feels. Yakone looks up at her with pain in his eyes, though his voice is upbeat. He assures her that he was fine, and he was happy that the firesnake was allowing them to rest. His eyes half-close, though he forces them to open again so that he may remain conciousness. Lusa comments on how brave he was.

Kallik shares her worries on Yakone, saying they needed to find the correct herbs to save him. Lusa feels bad for Kallik and Yakone. Lusa climbes a tree and discovers that there is a Flat-face healing den nearby. She tells Kallik and Toklo she found a field of herbs that will help Yakone, an that she would bring some back. Toklo wants to go and help Lusa, but she insists that she is fine and she can do it alone.

When Lusa gets to the healing den, she tries to get in but fails. She gets worried that Toklo will come and look for her. Lusa is about to fall asleep when Urjurak comes and tells her to sleep. She awakens with pills and an ointment for Yakone. When she returns, she tells them the truth. Toklo is mad, and Kallik is happy.

Yakone starts to get better, and Toklo is starting to feel more at home. The bears dicide to split up and go there seperate ways. Kallik and Yakone were starting to make their way to the melting sea. When Kallik and Yakone save a mother grizzly bear and her cubs, Kallik wants to join Toklo and Lusa again, and then go back to Yakone's home, The Endless Ice. Yakone agrees.

Whe they reunite, they make a plan for chasing the wolves away. The plan works and Toklo disides to come to Great Bear Lake with his friends to finish their journey.

Relationships with the other Seeker Bears

Yakone loves and respects Kallik. He can become over-protective of her sometimes when she is hurt or in danger and is frustrated that his missing toes stop him from doing that.

At first, Toklo disliked and was suspicous of Yakone. His grudge towards Yakone grew as he thought that Yakone was taking his place; hunting and seeming to be like a leader, which was what Toklo usually did. Toklo would argue with Yakone frequently, but when he is in a good mood, he will be friendlier toward Yakone. Their friendship develops and strengthens more in River of Lost Bears.

Yakone respects Lusa, and helps her a lot. He offers to carry her on his back whenever she becomes tired, and respects the fact that she was not born in the wild.

Even though Yakone did not get to know Ujurak well, he listened to Ujurak when he suggested eating moss to get rid of the sickness Yakone and the white bears of Star Island had gotten through eating poisoned seals. Yakone beilives that Ujurak is watching over them.

Yakone: "I don't want you to leave."
Kallik: "I'm sorry. I wish things could have been different.."
Yakone: "They can be. Let me come with you."
Kallik: "But this is your home..."
Yakone: "My home is wherever I want it to be."
Kallik: "You could be making a terrible mistake."
Yakone: "Maybe. But at least let me be free to make it.  Are you going to tell me that you do even worse then steal cubs?"
—Yakone telling Kallik that he will come with her to the Melting Sea, Spirits in the Stars',' pages 271-272 (hardcover).

Lusa: "The forest isn't my real home, though."
Yakone: "But I thought..."
Lusa: "No, I was born in the Bear Bowl."
Yakone: "What's a Bear Bowl?"
Lusa: "It's a place flat-faces made. There are a whole bunch of bears there. My mother, Ashia, and my father, King, and my friend Yogi. And one time I met Toklo's mother, Oka, there."
Yakone: "Sounds weird. Why would the no-claws make a place like that?"
Lusa: "They liked looking at us, I guess. We had fun there, Yogi and I. We used to hide like this. And then we'd leap out and pounce!"
—Lusa telling Yakone about the Bear Bowl, The Melting Sea, page 80 (hardcover)

"'This you caring? [...] I remember when you really cared. When you lay down as bait for coyotes to save your friends. When you trekked for a moon to find Lusa. You were missing toes then, remember? You haven't starved since you got caught in that trap. You can still do everything! This is just an excuse."
—Kallik's reaction to Yakone being bitter over his injury, The Longest Day, page 240 (hardcover) 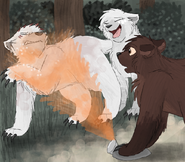 Retrieved from "https://seekers.fandom.com/wiki/Yakone?oldid=23235"
Community content is available under CC-BY-SA unless otherwise noted.